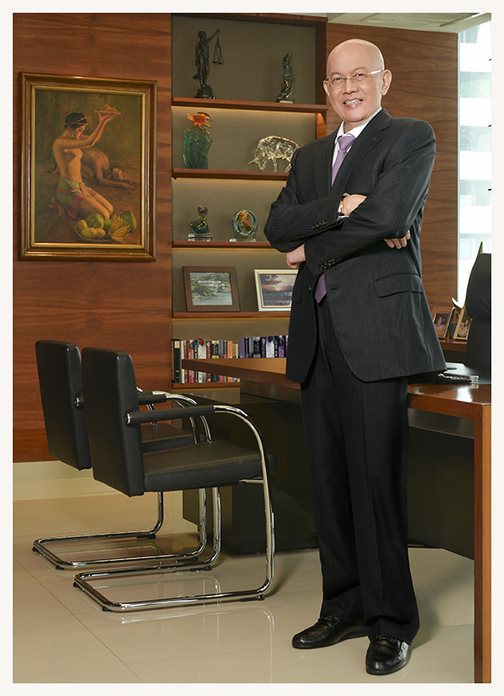 "The Firm succeeds never by timid action but in the relentless pursuit of its goals in the boldest manner, even at times to the extent of being outrageous."

Atty. Villaraza is the Chairman and Chief Executive Officer of the Firm. As one of the founding partners of the Firm, Atty. Villaraza pioneered a bold and oftentimes, aggressive style of lawyering that has become a cornerstone principle of Villaraza & Angangco today. With extensive experience in commercial transactions, banking & finance, and the myriad aspects of commercial law, Atty. Villaraza specializes in telecommunications, corporate & commercial law and litigation. Under his early lead, the Firm developed a reputation for 100 percent victory rate especially in corporation law that reverberates even to this day in landmark cases and the existing business landscape.

Known for his divergent and high-stakes solutions to legal quagmires, Atty. Villaraza continuously leads the Firm to become one of the best legal practices in the Philippines and in the world. More currently, Atty. Villaraza expends effort in mentoring the Firm’s young lawyers, instilling in them the drive and desire to become the best in their fields regardless of all challenges and oppositions.

Through the years, the Firm has developed an unmatched capability to launch and sustain coordinated and multi-pronged legal campaigns that have placed it not only at the forefront of decisive changes in the nation’s legal field but, oftentimes, at the driver’s wheel. Undoubtedly, it is Atty. Villaraza’s untimid and unapologetic drive for excellence that has pushed the Firm to the heights that it has reached.

Atty. Villaraza earned his Bachelor of Laws from the University of the Philippines College of Law in 1975, where he graduated 3rd in his class and was a member of the Order of the Purple Feather Honor Society. He was admitted to the Philippine Bar in the same year. He also holds a degree in Bachelor of Arts major in Philosophy, which he earned from the same university in 1971.